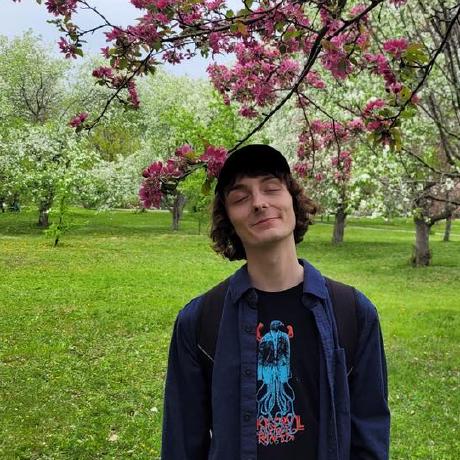 During our last class, we successfully challenged Initial Concepts and are thus now in the Deep Dive stage! Of our three prototypes, we decided to move forward with the Arena game, with one important change: QA feedback was nearly unanimous that the splitscreen controller-based version was not cutting it for players. Thus, the first thing we did this sprint was one of the biggest challenges we’ve faced as a team yet: networking the game.

To start off with, it’s important to note that this first pass of the networking for Modulate is meant to be placeholder and temporary, and was implemented primarily to prove the viability of the concept and to get QA feedback. Currently, far too much is decided on the client side, which is concerning for any game where players are against each other, both for cheat prevention and lag compensation. With that in mind, here’s how the networking has taken shape thus far:

The first thing to do was to get players moving around in the same place. To that end, I set up the NetworkManager provided by Unity and added a NetworkTransform component, and changed our primary Player script to be a NetworkBehaviour instead of a MonoBehaviour and made the necessary tweaks (such as ensuring input is only collected on the local client). It’s important to note that at this point, the player object is entirely client-authoritative, and the only value synced over the network is the Transform component.

The next step was to get weapons to shoot over the network. For this early prototype, each client simply sends the server a Ray (consisting of a Vector3 origin and Vector3 direction) for each shot fired when it occurs, and the server broadcasts this to all clients (without verification) who then recreate the shot on their end. Currently, each client is responsible for tracking its own health and calculating damage from the shots received from other players. The client then notifies the server when their health has reached 0 and they have died, which the server then broadcasts to all other clients. 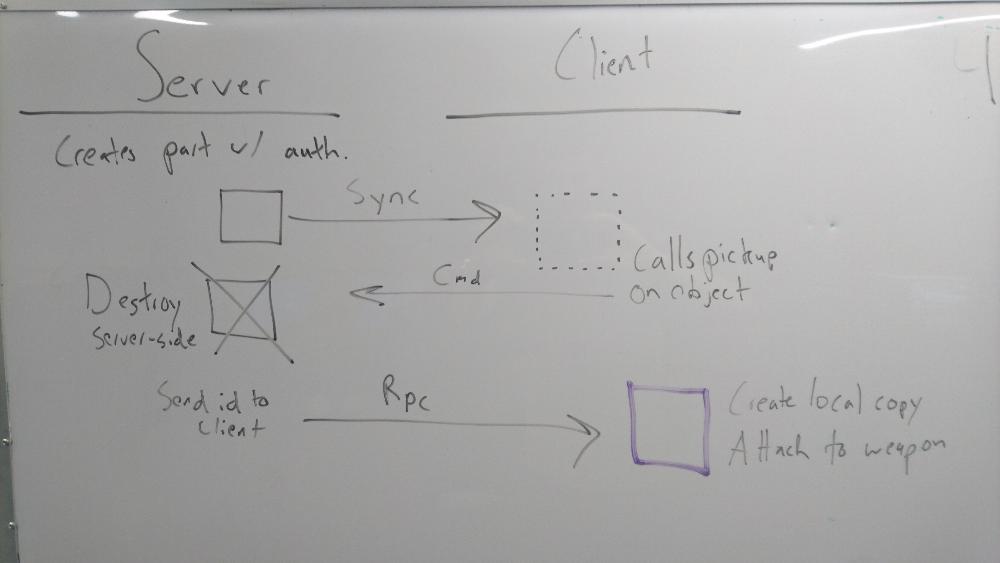 After getting weapon firing and player deaths working, the next step was to sync weapon part pickup events across the server. Again, we are not yet using a server-authoritative system like we should be quite yet, for the prototyping and demoing stage. Instead, we follow a system much like is demonstrated in the whiteboard diagram I drew (pictured here) while trying to figure out how to get this working quickly. Essentially, the weapon parts that rain down from the sky are created on the server and networked to all clients. Then, when a client calls “pick-up” on one of them, the original item is destroyed and an RPC is called on all local copies of that client to equip whatever part was grabbed. In other words, the actual state of the weapon is not fully networked, and the server is not authoritative on the matter; if a client misses an equip event, they will have the wrong weapon part for one of the other players in the game.

The final step in networking (discounting simple things like the score and match timer) was getting the “gravity gun” hand working. This proved to be the trickiest part and is something I am still not sure how to implement going forward. The trick with the gravity gun is that it must affect physics objects (the falling and fallen weapon parts) using physics forces, but then transition those objects to a non-physics-driven state when within a certain range, all with smooth motion on all clients. The behaviour of the “gravity gun” is also very heavily dependent on input state. The original, single-player version of the gun was a finite state machine with transitions decided almost exclusively by changes in input–something that does not work as well when networked.

Outside of networking, a lot of time this week was spent rewriting the code that determines a weapon’s spread and recoil. A lot of the programming and design change was influenced by this GDC about Splinter Cell by James Everett from Ubisoft Toronto.

While there were changes made to adjust the system to fit first person rather than third person (as well as an action game rather than a stealth game), the approach to recoil and dispersion in particular were very interesting to us. Some important changes were:

The first draft of the technical plan for Modulate was also written this week. It’s currently 11 pages, and goes in depth about our engine choice, our development environment (JetBrains’ Rider OR Visual Studio 2017 with ReSharper), and our version control choice (git for our development repository, with a school-wide standardized SVN build server). Four pages are dedicated to discussing the mechanics of the game and the technical risk involved with each.

Overall, this was another successful week of development, and as always, I’m excited for the next sprint to start.